A Salute to Dr. Michael “the Archangel” Smith on the 25th Anniversary of His Founding NADA

Michael Smith was born in California and when he got his medical degree as a psychiatrist, he could have stayed right there in California, say Santa Monica, and had a beautiful life taking care of Hollywood stars, sunning, and swimming.  Instead of that, he moved to New York City where he counseled prisoners on an island jail, and worked at Lincoln Hospital’s treatment center in the Bronx.  Even today, it is an area that is poor, with many homeless people who have issues with addiction and mental illness.  The medical director, Dr. Taft, was murdered.  Other psychiatrists at Lincoln found new positions in safer areas, but not Michael.  He spent a lot of time talking to the staff and to patients.  Dr. Smith also read about Dr. Wen, a surgeon in Hong Kong who used acupuncture to perform surgery on an opium addict.  The patient told Dr. Wen that his craving for opium left him during the acupuncture.

Dr. Michael Smith, I believe, became the Archangel at this time.  With his education and brilliance, he could have certainly found a much better paying job, but he put his patients first … and their needs.  At this time, instead of job hunting, he did research on acupuncture and developed an auricular acupuncture program.  He placed his patients in a room together to assuage their fears, and so they could learn that recovery is not done in isolation but with others who are in recovery from drugs, alcohol and mental illness.  There they sat, then as they do today, in quietude, in peace, letting the feelings of goodness and wellness return … and in doing so allowing their own spirits to soar.  To believe that they matter, that they count and can be accountable.  Methadone was no longer an option.  Full recovery from drugs and pain became the mantra.  The programs of Narcotics Anonymous and Alcoholics Anonymous were recommended in a clinic that became a holistic center for health care.

Many patients suffered from post-traumatic stress and current traumatic stress because of their backgrounds: victims of physical, mental, sexual and psychological abuse … both as children and adults.  How could they sleep at night without drugs?  Dr. Smith, with the assistance of herbalists, developed teas that helped sleep come, even to those severely disturbed.

Dr. Smith gave medical assistance and advice to the judges and lawyers who started the first drug treatment courts in America.  I met him in Nevada at a drug court conference and was astonished that he would help without billing the courts on an hourly basis.  He did it pro bono … for the good of humanity.  Dr. Smith came to the courthouse where I presided as the chief judge.  He spoke to the judges and lawyers in a kind and humble way.  When asked, “How does acupuncture work?” he said, “You should ask my patients.”  I did.  I visited Lincoln Recovery Center with another judge who was a naysayer and doubter before she interviewed the patients.  We were both moved by the stories of their lives and how, for the first time, they had a life.

This noble doctor has his own mantra.  “Whatever the problem is, you have to make it better.”  As a child, he suffered from a speech disorder.  He taught himself to think before he spoke and he learned to speak slowly.  What started as a great hindrance in life became a blessing, a mitzvah.  He came to believe that we are change-makers of our own destiny.  Dr. Smith counseled patients not to feel bad about themselves, or punish themselves.  As Suneel Vatsyayan, founder of NADA India, so beautifully put it, “Dr. Smith has the energy of a child and the wisdom of a saint.”  He treats each patient with dignity, and helps them understand that: “Whatever the problem is, you have to make it into something good.

You may have seen the “Archangel” flying to Ethiopia, Nepal, Ireland, India, Africa.  You could only see him if you travel economy class as he does.  He has brought treatment and recovery principals and the NADA protocol to the world.  Police in India, judges in America, Chinese acupuncturists working in HIV clinics, doctors and nurses helping the mentally ill through the use of Dr. Smith’s auricular acupuncture in Russia, Asia, throughout Europe, Canada, South America, Mexico, the Philippines … and in the state mental hospital in Pueblo, Colorado.

Dr. Smith is the Johnny Appleseed of human rights to the traumatized of the world.  He says that everyone has the

Right to be Drug free

The right to be nurtured with needles, with tea, in 12 Step programs … the right not to be categorized … alcoholic, addict, bipolar, etc.  We are all human beings, we are all sacred.

How does he do it?  He speaks the truth to all who mean well but do harm.  He speaks the truth to the high and mighty, to all who learn that healing does not come through enabling and patronizing individuals.  Dr. Smith talked to the judges at the Markham, Illinois, courthouse.  He helped them understand that those of us with mental health and addiction disorders can indeed be helped by judges speaking to them like they would to their own sons and daughters — with love and compassion.  No one will change their outlook or conduct if they believe themselves to be hopeless.  “Restore hope. Take what they have done good in their lives and build on this, build on their potential.”  Many judges are former prosecutors who referred to defendants only by their first names, called them “scumbags,” “hopeless alcoholics,” or worse.  Prison guards tell me that the last words a judge says to a defendant helps them or haunts them.  If the judge sends them to prison but tells them that they can make a difference, not only in their own lives but by helping others, then their conduct is excellent.  If judges took Dr. Smith’s advice of making the best of every situation and person, how the world would be changed.

In closing, let us remember that the mark of a great person is that their work is never completed in their life time.  And so it is with Dr. Smith.  The circle from Dr. Wen of Hong Kong who taught Dr. Smith, who then refined the protocol to 3 to 5 auricular points — now Dr. Smith is being quoted on the internet in China.  The yin and the yang, the chi … he lifts us all.

Presented to the NADA Conference in New Orleans, 2010 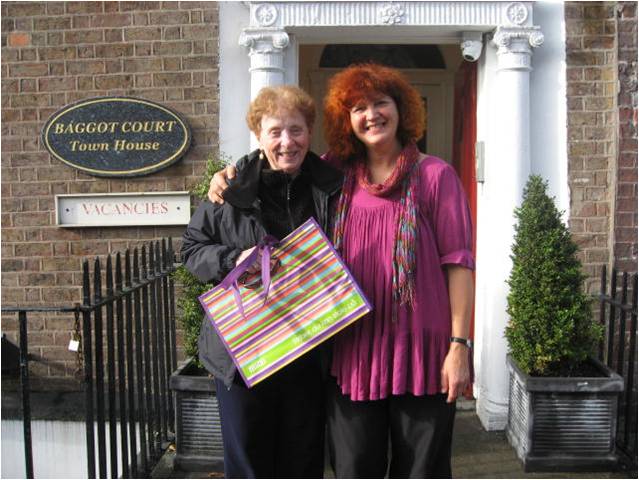